Controversy would appear to be an inherent result when it comes to the making of an Oliver Stone film. From 1986 to 1991 the American director and writer was on top of his game as a highly successful filmmaker, not discounting his Oscar winning screenplay “Midnight Express” written in 1978. His body of work seemed to only greatly expand throughout the mid to late 1980’s with outstanding critical successes, “Wall Street” and “Platoon” (1987 and 1986) being his most notable features. But alas the 1990’s would be an era less kind to the director. However JFK could possibly act as the very last ‘great’ Stone film we as a cinema-going audience would ever get to watch; with “Natural Born Killers” (1994) and “Nixon” (1995) being less-focused and less-engaging swan-songs to his now slightly more politically obnoxious career.

JFK is Stone’s wake up call to America about the troubled and highly controversial conspiracy theory relating to then-President John F. Kennedy’s assassination in Dallas, Texas, 1963. The story however follows the real life struggles of Louisiana district attorney Jim Garrison and the lengthy court case he filed against certain individuals whom he believed were co-conspirators in a cover up of the President’s death over five years after the event. What follows is a nearly three hour long epic that delves into almost every possible theory to have been published about the shooting and the ensuing aftermath of Lee Harvey Oswald’s murder. The genius behind the film however is the way in which Stone manages to tie up every loose theory imagined together without the main focus of Jim Garrison’s struggle becoming muddied in narrative over-saturation. This is helped greatly by the solid performance of Kevin Costner who, whilst not the greatest actor in the world, is certainly believable as the tough-as-nails district attorney who eventually becomes hellbent on uncovering what has, so far in 2012, been successfully hidden away.

All the elements of a great Stone film are in place here also. The stellar cast hold together what becomes a very complex and intricately written narrative that spreads over several years and contains numerous flashbacks. The editing, almost a precursor to the style seen in Killers, is fast paced and exceptionally energetic. Assisted greatly by the edit is one of the more unusual yet quite effective scores to be produced from iconic composer John Williams (in fact several scenes were edited around the music as it was recorded months before shooting took place). Robert Richardson (a fellow Stone collaborator) excels in bringing us a darkly lit, tension filled landscape that works perfectly with many of the conspiracy theories being visualized on the screen for the audience. We are also treated to a wonderful recreation of early 60’s America with a level of authenticity that sadly nowadays can only be achieved with big-budgeted productions.

JFK could be viewed perhaps as the MOTHER of all political thrillers and it’s very hard to find another example that contains the same level of direction that Stone zealously exudes onto the screen. Not just in performance but also, and more importantly, in focus. This is the work of a man on a crusade to enlighten Americans about their countries dark past. Stone himself had a great amount of personal attention drawn into the project as he himself believes that President Kennedy was assassinated by the government (on that darn grassy knoll), and his passion certainly shows on screen. The only advice I could give is to not take everything revealed to be fact as Stone almost certainly takes liberties with his biased agenda, filming sequences which have had very little historical evidence to support. Also watch out for one of the most outlandish performances you’ll ever see Tommy Lee Jones in, with heavy emphasis on the word outlandish! 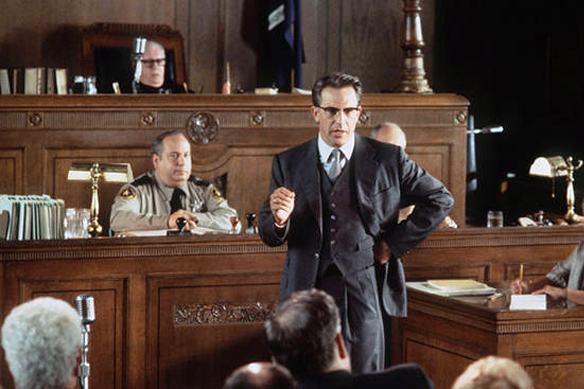 Jim Garrison: The FBI says they can prove it through physics in a nuclear laboratory. Of course they can prove it. Theoretical physics can also prove that an elephant can hang off a cliff with its tail tied to a daisy! But use your eyes, your common sense.