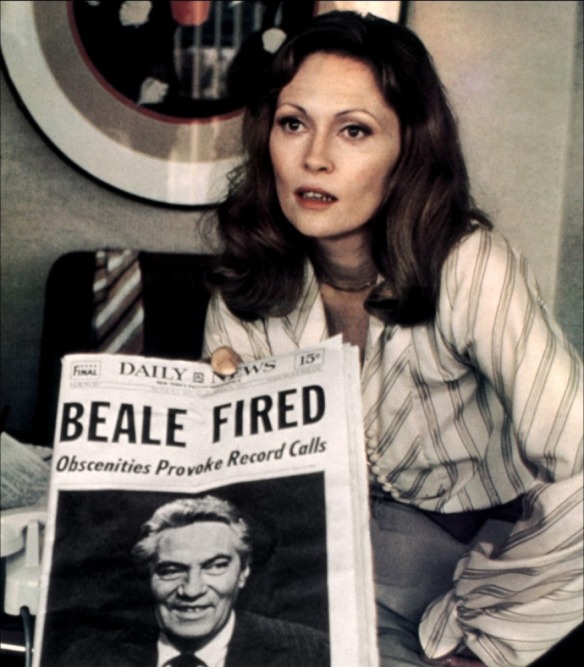 When director Sidney Lumet passed away last year in 2011 two thoughts raced through my mind. The first was that a small group of film fanatics scattered across the globe suddenly cried out “Oh-No!” and “What a shame!” together. The second was a more depressing thought, that everyone else on the planet would be asking the question “Sidney who?” which caused me to shake my head repeatedly. Director Sidney Lumet was one of America’s most original filmmakers with a body of work that many have forgotten about but would be foolish in denying the importance and brilliance of. From his earlier films such as “12 Angry Men” (1957) and “Serpico” (1973), the movie that put Al Pacino on the map by the way, Lumet enjoyed many critical successes during the 1950’s, 60’s and 70’s; “Network” is one such success by Lumet that has managed to stand against the test of time and been revered as one of the great contemporary American dramas by critics and the general public alike. Why? Because its subject matter still bares striking relevance to today’s society with almost terrifying accuracy!

Network is Sidney Lumet’s best known film and for good reason. It won a posthumous Oscar for actor Peter Finch who died not long after the film’s release, a first for the academy at that time. But also, and even more importantly, its screenplay happened to accurately predict the declining trend in journalistic quality and presentational style of nearly every single American-based news network conglomerate over the last forty years… *wheeze. So yes, Network is an important film on many levels. This is not to say that Lumet’s other works failed to grasp different engaging contemporary issues with American society, Network was just one of his more ambitious, and certainly most political pieces in his career. The story follows aging and consistently disgruntled news anchor-man Howard Beale (Peter Finch) who attempts to keep up with the constantly changing political correctness of the news network he works for. His personal turmoil with his network supervisors eventually leads him to breaking down on national television whilst becoming a surprising television celebrity shortly there afterwards. From being fired and then suddenly rehired by the network, Beale begins to host his own television show where he does nothing but exclaim protests to the audience against the state of declining American society.

Many of Lumet’s films are dialogue heavy with Network being no different in this respect. Whilst reading his biography “Making Movies” he often mentioned how dialogue for him not only helps to tell the story but should also be used in the same way the sound designer mixes sound or the composer scores music. Network contains several scenes where this style of poetically constructed dialogue can be witnessed acutely. The character of Diana (played wonderfully by Faye Dunaway who also won the Oscar for Best Actress for the film) is a powerhouse of taut dialogue, with many of her scenes involving her storming around the endless corridors of the networks head office, crying out to the television executives to give Howard Beale his own show. The same can be said for the many verbal spouts that the head of the company Max Schumacher (played by William Holden) has with not only Diana but also Beale himself.

The genius of Network‘s script, penned by Paddy Chayefsky, a three time Oscar winner for Best Screenplay, actually leaves you quite depressed towards the end of Beale’s comic-tragic escapade with television. His speeches about obesity, lack of literacy, corrupt healthcare and the globalization of American conglomerates, including the Americanization of other poorer nations, left me in a state of deep contemplation. Beale himself acts as an avatar for many of the outstanding journalists, news reporters and network executives that we have in today’s world. The ironic tragedy of the situation that Network surfaces however revolves around these very individuals, who appear to be trapped within their own tightly regulated news systems, operated and overseen by invested corporations preventing them from being able to report news perhaps deemed too ‘unflattering’. Warren Beatty would later go on to use Network as a template for his last starring film Bulworth (1998), the tale of a US senator who, whilst in the middle of an election campaign begins to talk about the true nature of American politics, winning over the approval of the people only to then be killed by a man hired by an insurance company he publicly demonised.

It’s a great shame that Sidney Lumet is no longer with us in the movie-making world as his collection of work, from early beginnings right up to his most recent features have enjoyed constant critical approval and for a time gained public notoriety. It is also deeply saddening however that such films rarely performed well at the box office after Lumet’s most famous period in his career in the 1970’s (ignoring The Wiz of course), thus leaving many to ask the question time and time again, “Sidney who?”. Network is one of the few films I would recommend people to watch based solely on statements of the obvious. The hard to swallow truth that Howard Beale rages about is an important perspective that people should embrace. The struggle that he himself rages with big corporations, whilst still working for one, is a tale that could be found in the real world very easily (google American actor Ed Asner and you’ll see what I mean). Watch if you’d like your opinion of the current state of news representation to expand, or watch if you want to see wonderfully written dialogue with engaging and entertaining characters along with perhaps one of the most iconic and memorable sequences to have been produced out of American cinema since the 1960’s! Stay tuned to your sets (or screens) until next time!