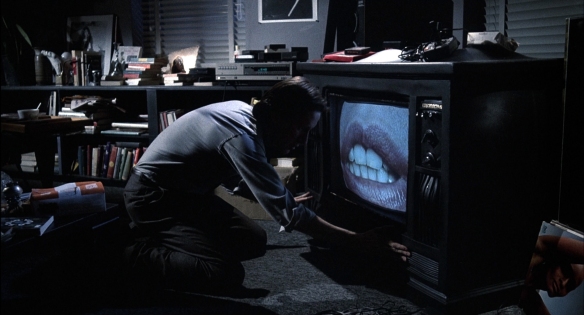 David Cronenberg is a director whose name carries the same weight as several other American filmmakers and disturbing visionaries such as David Lynch and Jim Jarmusch, with a successful yet varied career that has spanned over four decades now. What separates him from most storytellers however is with the fascination and iconic imagery relating to the human body he installs in so much of his work. Specifically the themes of bodily mutation, penetration, sexuality and the power of the human mind, which have all featured in some form or another in the majority of his contributions to cinema, “The Fly” (1986) possibly being his magnum opus in such matters. His 1983 feature “Videodrome” focuses on nearly all of these elements, but also manages to cleverly delve into an area of society few actually think about, but most experience practically everyday.

James Wood’s plays Max Renn, president of Channel 83, a television station that broadcasts pornographic films for adult audiences across America and Canada. As the plot unfolds Max begins a relationship with Nicki Brand (Deborah Harry), a psychiatrist who at first despises what Max and his station stands for until she is introduced to a new form of pornography known as Videodrome, a graphic, hardcore torture based porn channel being broadcasted from Asia. As Nicki becomes more and more obsessed with participating in Videodrome, Max attempts to find out who is really controlling the television station, whilst at the same time discovers a government run plot to control the minds of the general public.

The 1980’s truly was the era of Cronenberg as an independent filmmaker. His ’81 hit “Scanners” brought him fame as an up and coming, fresh director (although ironically Cronenberg had been making films since the late 60’s) whose focus on bodily perversions became the iconic motif associated with the film. Videodrome followed and helped to boost the career of James Woods (a personal favourite of mine), whilst “The Dead Zone” (1983) was a cult vehicle for Christopher Walken, and also featured a truly loathsome portrayal of a cliched American politician played by Martin Sheen. In a strange way Sheen’s character could be seen as an extreme parallel copy of his character President Josiah Bartlet from Aaron Sorkin’s show “The West Wing” for some but I digress. As mentioned before, Cronenberg’s 1986 film “The Fly” could be the best work he has ever assembled. Jeff Goldblum not only excels as the obsessive scientist who slowly turns into a fly, but the director’s team of special effects artists outshines even the solid writing of the script, by conjuring such incredible images of a half man/half fly creature.

Videodrome is somewhat of a forgotten film in the list of features made by Cronenberg, though it’s certainly not an inferior piece. He had perfected his skills in storytelling after a slightly convulsed Scanners, but the performance’s from Woods and Harry is something Cronenberg never did manage to capture again on screen; the worst attempt was with Jude Law and Jennifer Leigh’s love interest in his failed feature “eXistenZ” in 1999. The physical effects by make-up guru Rick Baker are something that has to be seen to be truly appreciated! Items such as a breathing television set, a manic VHS tape, and a full head helmet that looks like a cross between a game gear and the head of a Xenomorph from the Alien franchise all look incredible within the frame. Assisted greatly in creating jumps and scares for the audience is the score for the film, composed by Howard Shore, a true master in creating suspense pieces.

In short, Videodrome’s cult status is well deserved, not only for the inventively goofy plot that Cronenberg constructed, but also for the originally creative, and personal, passion he injected into the final result. The themes of television control, government encouraged apathy and sexual realisation, one could argue, are present in nearly all of his features, however Videodrome was one of the first to introduce them to what would become his larger fan audience over the years, and should be remembered well for that fact alone! 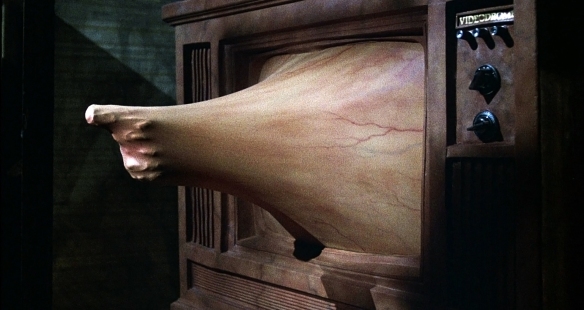 Max Renn: I’m looking for something that’ll… break through. You know?