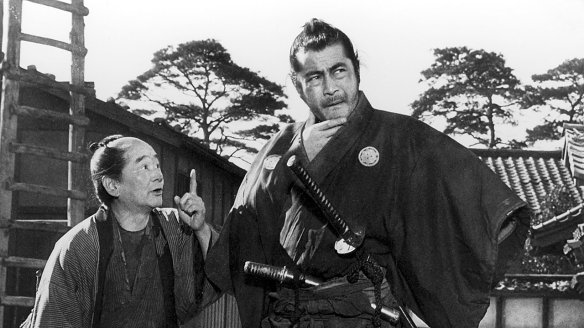 It would only be a matter of time before the work of Kurosawa appeared on this blog once again, luckily it’s a film that not only inspired the spaghetti Western series, but also helped to re-establish the directors ability to mix genres to great effect, in one of the last of his Toho studio productions before his career took a turn for the worst. “Yojimbo” is the tale of a lone ronin who enters a small, Japanese village run by two rival gangs of crooks and corrupt samurai. Overtime the nameless ronin shows off his skills as a sword for hire and is immediately taken on by a corrupt land lady after he slaughters three men from the rival gang. As the plot progresses the ronin begins to sell his skills to the highest bidder, whilst secretly destroying the strength of both gangs from within, to save the towns people from tyranny.

The plot of Yojimbo is one that mixes several genre’s from different countries cinema’s, and twists them to suit Kurosawa’s needs. The Western’s made by John Ford from the 1930’s and 40’s were combined with Kurosawa’s own genre of historical samurai drama’s. Italian filmmaker Sergio Leone would soon take up Yojimbo‘s clever twist on Western conventions, and then place the rising star Clint Eastwood as the lead role of the nameless gun for hire. The cleverness of Kurosawa’s take on Ford’s incredible body of work is one to definitely be admired as the codes and conventions that followed in the Western formula at the time had never been placed inside a different historical backdrop. Or, you could look at it as the first samurai warrior epic to have been filmed in the cinematic format of a Western before, whichever you prefer.

His use of lighting and sound helps to elevate the status of our unknown hero, as does the stellar performance of Toshiro Mifune, a Kurosawa regular, who brings a feeling of dominance and total control with his presence to the film. This control is displayed wonderfully in the many sequences where our “hero” is blackmailing one of the two rival gangs for his skills; if they fail to increase his pay he will then defect to the other side and join their fight. Something Eastwood understood while shooting “A Fistful of Dollars” (1964) in his own portrayal of Mifune’s character, was the humour lurking behind the powerful body. We often see Mifune, and his loyal companion who joins him on his quest to destroy the rival gangs enjoying the mind games he torments the gangs leaders with; playing with their wallets and food reserves in order to make the situation even more desperate for the crooks.

The 1950’s and 60’s was most definitely the golden age of Kurosawa films, with Toho studios producing some of the finest examples of his work, Yojimbo being among some of his greatest. The epics of “Throne of Blood” (1957), “The Seven Samurai” (’54), “Rashomon” (’50). and the ingenious modern day film noir “Stray Dog” (’49), are only a handful of the many films made by Kurosawa, that have gone on to influence not only Leone, but also Spielberg, Lynch, Altman and Lucas to name a few over the decades. In fact George Lucas and Francis Ford Coppola were so inspired by his work that they helped fund his troubled 1980 production “Kagemusha” mentioned earlier in my blog. The legacy that Kurosawa left behind after his passing in 1998 is tremendous, and can still be felt in the world of cinema to this day. Almost half of all of his directed works have been remade and remodeled into numerous adaptations, one prominent example being “The Magnificent Seven“, released six years after “The Seven Samurai“. Yojimbo is no different, with its iconic imagery and plot, Kurosawa once again managed to reinvent a genre that was not only received with open arms across the world, but adapted by future filmmakers as a tribute to the man’s skills and collected work, quite a feat no? 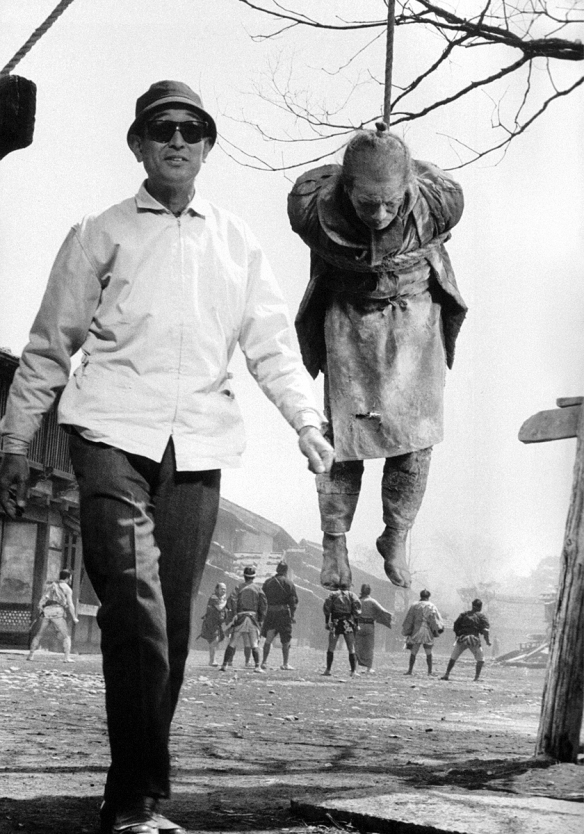 Sanjuro: I’ll get paid for killing, and this town is full of people who deserve to die.
(Above) Kurosawa on the set of Yojimbo, in one of its earliest scenes.