China has often been presented as the last great unknown in the world of cinema. Vastly different cultures, customs, and histories clash conspicuously with Western interpretations of life in the Far East. Although the country’s modernised communist state has evolved radically since the days of Mao Zedong and his little red book, there is no denying that China’s social problems have persisted well into the 21st century. Starting a successful “Hollywood-esque” film industry that produces eye-popping action flicks and bizarrely introduces additional Chinese scenes from American-made movies is just one example of the modernising effort that the state’s politburo are trying to cultivate. However, for all its ideals and glory there still lies a more subtle, hidden nation. One that is as harsh as it is ugly, and fortunately for the ruling party, is poorly marketed towards audiences in the West. Not One Less stands proudly as a tribute to this secret, poverty-ridden China, depicting a tale of good overcoming the gigantic odds of a far larger, more modern nation than we as Westerners are used to seeing on our screens.

The story is set in the humble village of Shuiquan, far out into the barren deserts of Northern China, where 13-year-old Wei Minzhi; a fresh-faced, newly trained substitute teacher, has arrived to safeguard the few children that remain at the local school. Wei is told by the regular teacher that ten children have already left the village to find work. He does not wish to lose anymore and so promises Wei a reward of 10 yuan (£1 and 4 pence) if she manages to keep his class together for one month until he returns. Immediately we see Wei struggle with controlling her class of ten-year-old terrors as they soon learn that she has no actual training as a teacher or presence of authority. After several days of battling with her pupils one troublemaker, Zhang, flees the village to look for work in the nearby city. Determined to make sure Zhang receives a proper education (as well as claim her hefty bonus) Wei enlists her class to help her raise the money she needs for a bus fare to search for Zhang and bring him back.

Already you may feel this clash of motivations in our main character’s efforts to find her missing student slightly disturbing. Money is indeed a heavy presence felt throughout the film but this is not due to any visual displays of wealthy abundance or scenes of the poor fighting the rich. In fact, it’s quite the opposite. The sheer lack of money that all of the characters endure and their melancholic acceptance of the situation is striking to see. The village Wei teaches in is so poor that her school can only afford one piece of chalk for the board each day. The local mayor refuses to give Wei bus fare due to the fact that the village simply cannot afford it. We as an audience are constantly at odds with this unknown world within China and some may even struggle to contemplate the poverty here on display. Director Zhang Yimou shoots the film with a hand-held approach, bringing a further element of authenticity to the story whilst we follow Wei’s struggle to earn enough money to find Zhang. Once she finally arrives in the city the world on-screen couldn’t be further away from the quiet, docile life of the village. Cramped streets packed to the brim with people, never-ending alleyways drenched with litter, concrete tower blocks jutting out from the polluted ground; the needle in a haystack metaphor seems all the more appropriate when we watch Wei desperately search for Zhang. It is with relief then that Wei never succumbs to this new world of sin, debauchery, and steel-enforced concrete, and keeps her focus solely on making sure her missing ten-year-old student is safe.

China can indeed be a mystery to the eyes of a foreigner. A huge nation controlled ruthlessly by a single party which promotes all levels of Marxism whilst also embracing the ever-grinning smile of the Ronald McDonald clown. Wei’s world is a fishbowl within an even bigger bubble, as her struggle to adapt to the intensity of Chinese city life quickly turns into a touching melodrama. Director Yimou utilises the raw efforts and strengths of inexperienced actors and hires several locals from the village he shot the film to star as characters. Wei’s performance is remarkably reserved for such a young first-time actor. Especially when considering the emotional onslaught she goes through once she arrives in the city. The state itself is the real centerpiece of the action, displaying all the wonders and horrors of the Chinese way of the life we have come to hear about in the form of whispers and disturbing news reports. The disparity between rural and urban societies is appalling even for the late 20th century and Wei’s struggle to find her missing pupil is looked upon with more disdain than compassion from the local inhabitants. It would seem that in such a large and ever-growing nation the spirit of human kindness can be buried beneath the steel visions of China’s current leaders, despite the intentions Mao Zedong had for his people. What makes Not One Less standout, apart from acting as a stark window into modern China’s societal problems, is its message that compassion and love have a far greater reach and effect in this world than any political ideology could hope to attain for the next. 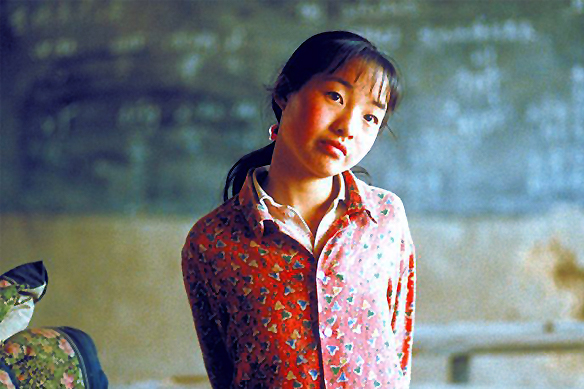 Zhang Huike: The city is beautiful and prosperous. Much better than the country.
TV Host: What’s the most lasting impression?
Zhang Huike: That I had to beg for food. I will always remember that.