A director that I will have try and not spam this blog with periodically is famed Japanese filmmaker (and personal filmic God) Akira Kurosawa. However I would be remiss if I didn’t mention at least one of his masterstrokes, albeit one that is considered much less influential than his famous Toho Studio days where the likes of “The Seven Samurai” (1954) and “Rashomon” (1950) were produced. Kagemusha, and the even more famous “Ran” (a personal favorite), were the last two great masterpieces Kurosawa made before his death and so its seems only fitting then that both films tackle the thematic subjects of age and regret, though both deal with said motif’s very differently.

Kagemusha follows the story of a poor beggar thief who bares an uncanny resemblance to the powerful Lord Shingen who, as luck usually always has it, dies in a skirmish with a rival warring clan. Not wanting to lose the moral strength of Shingen’s large army nor the steady control he maintained over his lands, a handful of loyal barons who worked for Shingen train the thief in order for him to appear as the now dead ruler. The plan starts off well until rising suspicions of the impersonators behavior begin to threaten the fragile balance that the barons attempt to maintain. What follows is a gripping Shakespearean-Samurai epic that could only be mastered so well by Kurosawa himself, an experienced expert in such adaptive power.

The pure scale of the film is one that we will come to experience again with Ran five years later, the last epic swan-song that Kurosawa created. But with Kagemusha we are treated to the much more personal and emotional tale of the main character; a poor thief who has the overbearing world of the samurai and noblemen thrust upon him against his will. We as an audience get to witness some jaw-dropping breathtaking imagery that Kurosawa recreated from paintings he had made for the film a decade prior to shooting. The most notable example is when Kagemusha has a rather terrifying dream sequence set in what looks like the landscape of an oil painting; where he is forced to flee from an 8ft statue of a samurai chasing after him. It is this kind of vivid imagination that makes me fall in love with the directors work so often. The graphic and hellish imagery of Ran, the use of weather and claustrophobia in Throne of Blood (1957) and the distinct costume and lighting designs of Rashomon along with countless other examples have all the best bits taken out and employed here into the design of Kagemusha‘s universe.

Kurosawa elevates his own standards in delivering epic visuals by making sure the focus distinctly stays on the emotional journey of the characters, something which can easily be forgotten inside of the spectacular vistas that he reveals to us. He also employs the usual fantastic troupe of actors that have worked with him in the past, most notably Tatsuya Nakadai who would go on to play the lead in Ran afterwards. If you wanted to see The Prince and the Pauper meets every Samurai film ever made then Kagemusha is for you. If you just wanted to watch a grandiose and visually splendid three hour epic then Kagemusha is also for you, perhaps even more so! Or….you could just go watch it no matter what mood you’re in and hopefully become awestruck at the grandiose scale and touching character journey that this aging filmmaker brought to the screen for us. 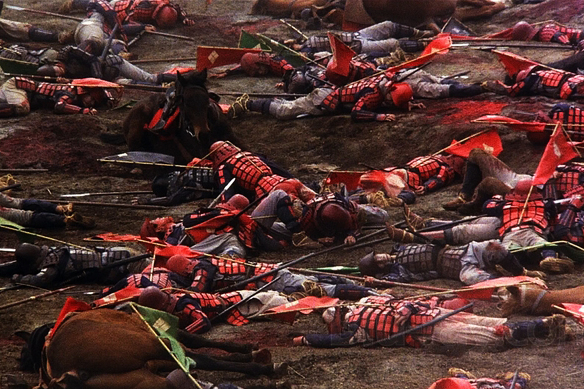 Shingen Takeda: I am wicked, as you believe. I am a scoundrel. I banished my father and I killed my own son. I will do anything to rule this country. War is everywhere. Unless somebody unifies the nation and reigns over us, we will see more rivers of blood and more mountains of the dead.