The post-apocalyptic setting is one that provides plenty of rich diversity for talented storytellers to exploit. The worlds such a landscape can create offer all of the necessary collections of bizarre and wonderful inhabitants, incredibly inventive uses for art direction and costume design, and of course intriguing moral dilemmas to solve. Such films that manage to successfully maintain an entertaining story with rich character development whilst at the same time set in a barren and desolate world should be acclaimed for pulling off the difficulty embedded in such a task. (I don’t feel like I need to remind anyone of the Kevin Costner disaster that was “The Postman” in the late 1990’s). Therefore it was truly inspired of director George Miller to not only have achieved a successful post-apocalyptic sci-fi/action drama, but to also harness the barren, desolate and horrifying wild land known to some as Australia in pulling off his cult masterpiece “Mad Max 2: The Road Warrior“.

Although in many ways a remake as opposed to an actual original sequel, Mad Max 2 is considered by many to be one of the best science fiction films of the decade, as well as arguably the best post-apocalyptic world ever presented on the screen. Max, the titular protagonist played by a young, less controversial Mel Gibson, is a former Australian police officer who now survives the wild landscape of a nuclear wasteland by scavenging whatever he can find on his travels. Eventually he comes across an oil refinery, one of the few left after a brutal Third World War, which is surrounded by a gang of freak show nihilists. Their leader, the Lord Humungus, wishes to take the precious oil inside the fortified refinery and kill anyone in his way leaving Max with a decision between survival and honouring his oath as a policeman in his past life.

Basic plots can be forgiven when there is a rich, on-screen environment for us to enjoy. Such little time is actually spent on the story you may be hard pressed to remember what it was exactly that everybody wanted. But in replacement of a complicated script we’re instead treated to the visual splendour of Max’s design. Every detail from the costumes, sets, vehicles and props really hammers in the feeling of a world completely destroyed, with only the remaining scraps left behind for survivors to utilise. The entire world has a secondhand, junkyard look where even the most simplistic items have been twisted, modified and most often, weaponised in order to combat the harsh landscape of Miller’s vision. And what a land it is! The scorching heat of the Australian outback is shot beautifully in many of the close-up and wides that showcase the horrors of Max’s reality. Barren deserts filled with skeletal corpses, hideous gang members that have twisted their appearance, and of course the never ending dirt roads that seem to carry on forever into the merciless sun.

The real show stealer however lies in the portrayal of the film’s antagonist, Lord Humungus, who at 6ft’7 is a towering force of intimidation. His strangely accented voice combined with the S&M leather body harness and hockey mask all works to create a truly original science-fiction villain. And his protégé Wes, a mo-hawked motor-headed maniac, provides some of the more thrilling action sequences. And there is of course Max himself, the cool as ever cop with tight lips but an itchy trigger finger. Gibson was only just at the beginning of his career and in having played the character before in the rather bizarre “Mad Max 1″ his performance second time round is far more reserved and refined. He allows the costume and handy shotgun to do nearly all of the talking as he drives around the outback with his beloved Australian Cattle Dog. The characters wits and instincts never seem to fail him during his scavenging for items but occasionally the straight-faced Aussie allows for a few humorous moments which are much appreciated in such a bleak world. Mad Max 2 may be a film in which design overtakes story but under George Miller’s direction every element on display in wonderful gritty celluloid breathes fresh life into this highly original and often disturbing portrayal of a modern-day Australia…. I mean post-apocalyptic society. 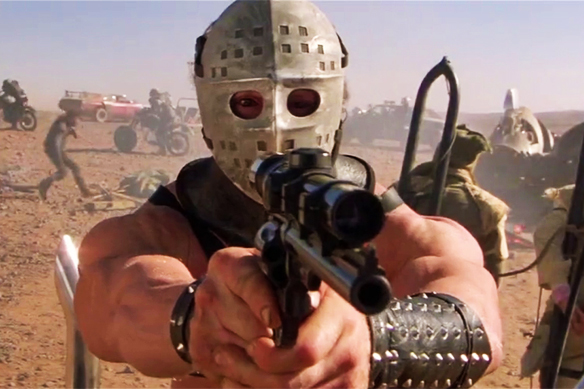 The Humungus: You disobey me! You puppy!