The career of Harrison Ford is one marked with repeated blockbuster success stories, cultivating for him an iconic status as one of Hollywood’s biggest stars over the past four decades. With the releases of Star Wars and Indiana Jones franchises, along with cult favorites such as Blade Runner, Ford’s acting plateau may now with context appear to have become somewhat stagnant in recent years. His careful selection of limited ranged characters creates an ironic problem for an actor of such super-stardom. And although Ford’s public persona only enforces such mentality, his achievements as an actor are none the worse off for it. It is only a filmmaker with the skill and craftsmanship of one such as Peter Weir who managed to tap into the darker side of this American star, creating an onscreen monster hauntingly different from anything audiences had ever seen before. The only tragedy is that no one wanted to see it.

“The Mosquito Coast” tells the story of Allie Fox (Ford) a cynical farmer-come-inventor who successfully manages to create a machine that can turn oxygen into pure ice. With his predisposed hatred for the changing world and his government’s supposed decline in morality Fox takes his family to the remote tropical rainforests of Central America to reveal his new ice machine to the local tribal natives. Such a plot may sound bizarre at first glance and Paul Schrader’s unorthodox screenplay makes no attempt to appeal to the basic common denominator for cinema-going audiences. However the personal journey that Fox and his family undertake quickly becomes an insightful glance into the maddening obsession of a single individual, devoid of empathy and understanding.

Ford’s performance as the slowly disintegrating Fox is remarkable to watch on screen. His curiously quirky and almost upbeat attitude witnessed in the first act later transforms into a deeply troubling personality, not for himself but instead for the unfortunate luggage that are the family members he has brought with him to the jungle. River Phoenix and Helen Mirren excel superbly as the at first supporting but later truly terrified members in Fox’s nuclear unit. The obsession to become an almost god-like figure to the native tribesmen that Ford carries throughout slowly twists and turns into a nightmarish scenario for a family taken from their home, now thousands of miles away. The desperation in Mirren’s role as a mother becomes the ultimate strain when confronted between pleasing her husband and caring for the endangered lives of her children. Phoenix’s Charlie character begins to experience the first beginnings of adulthood in a brief relationship he shares with the daughter of a preacher during his journey with his family to the rainforest. But any such personal developments are quickly cut short when the abrasive attitude of his father prevents him from growing up into earlier manhood. As such the family is seen to become thinner, weaker and more dependent on a single man who is losing his humanity as time in the jungle passes.

Weir’s direction of the tropical landscape is at first glance a beautiful paradise of a time long-lost to modern society. The local villagers that live with the Fox family are a welcoming community, happy to assist Ford in his personal quest. But as the growing dangers of poachers and loggers begin to make themselves known the fragile house of cards that Fox has built quickly falls into disarray. The usual suspects of Weir’s talented crew makes themselves known also throughout. Maurice Jarre’s electronic score is particularly haunting in certain scenes of the forest at night, whilst John Seale’s cinematography paints a vibrant and colorful canvas for us to gaze upon as the family attempts to begin a new life. Although Mosquito Coast‘s finale concludes on a more somber note than expected, the chance to see Harrison Ford play a truly unique character from his body of work is an opportunity not to be missed. His bravery in tackling such a demented personality that could have severely dented his almost “family-friendly” image is one to be admired. The real pity is that audiences seemed to not share his sentiment with such efforts, and since the release of the only Ford film to not recover its budget, it has only been on the rarest of occasions where he has since tapped into the morbidity of human nature he captured so well for Weir twenty-seven years ago. Although his career has endured the test of time with repeated successes since, we will never know the Harrison Ford that could have been had such an effort been embraced. 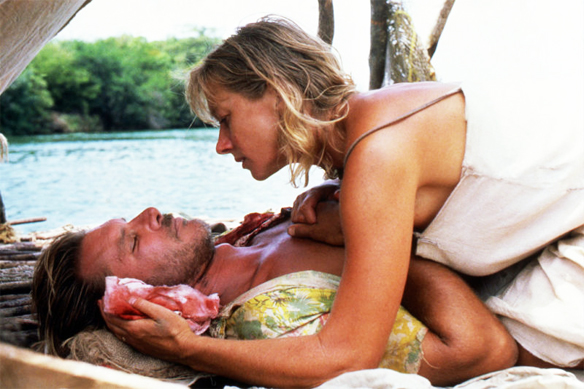 Charlie: Once I had believed in father and the world had seemed small and old. Now he was gone and I wasn’t afraid to love him anymore. And the world seemed limitless.