Take a British-made comedy with an American-led cast, a disturbingly young Peter Capaldi and the rugged beauty of the Scottish landscape and you may just end up with Local Hero for your efforts. However without Scottish director Bill Forsyth’s relaxed approach and ingenious sense of comedic timing all the above mentioned ingredients could easily have fallen apart and been cast into wild winds of our Northern neighbour. What makes Hero so special for a comedy is in its intense appreciation for the simpler qualities of life, a life often at odds with the fast approaching rat race of the “big city”. What is always wonderful about the 1980’s for me, is that such a clash of worlds is always made so much more visually apparent thanks to the dawning of the computer chip, the mobile telephone brick and of course the rebirth of the pinstripe suit.

Local Hero follows the story of “Mac” MacIntyre (Peter Riegert), a hot-shot business executive who works for Knox Oil, a rather morally questionable Texas-based oil firm who’s CEO, Felix Happer (Burt Lancaster), wishes to purchase the entire small village of Ferness in Scotland, in order to build a massive refinery.  Reluctantly Mac is sent from the comforting modern city of Houston to the wilds of Scotland’s highlands as he reaches the tiny village and begins his selling pitch to all the local land owners. However as time passes MacIntyre’s hostility to his new surroundings is slowly replaced by a newfound appreciation for the way of life the villagers lead. An appreciation that eventually forces him to choose between his career with Knox Oil or following his newly discovered desire for a simpler life.

For some such a description of the plot could instill a sense of dread or perhaps even loathing at the idea of a slack-jawed, American yuppie travelling to bonnie wee Scotland and getting caught up in the hijinks and shenanigans of the village yokels. However such fears could not be further away from the softly softly direction Forsyth applies to his representation of both American and Scottish cultures. The real heart of the piece is told through Peter Riegert’s portrayal of the arrogant, slightly xenophobic American city dweller who struggles to come to terms with his new surroundings and the habits of the local Scotsmen that he encounters. Riegert’s stubborn lack of appreciation for all things natural is eventually thawed over touching scenes of him walking across the villages main beach or studying pebbles and seashells in the nearby lagoon. With each scene where we see him traipsing around the area we notice the sharp 80’s business suit is quickly replaced with a knitted woolly jumper and the fancy “state-of-the-art” digital watch is soon thrown into the depths of the nearby icy waters. Forsyth uses MacIntyre’s changing appearance as a visual metaphor for the growing appreciation he, and the audience themselves, begin to feel for the fictional Ferness.

But appreciating landscapes aside the film offers plenty of additional characters to make life in and outside the village feel more like a gentle sitcom rather than a quirky comedy. CEO Happer has his own side story where an overly zealous therapist attempts to use abuse therapy in order to ‘cure’ his patient. MacIntyre’s corporate stooge and sidekick Danny (Peter Capaldi) has an infatuation with a marine biologist with webbed toes; and the local beach owner Ben Knox (Fulton Mackay) shares an unusual passion for astrology shared by Happer once they meet in person. All in all the film is a gentle affair with all the right ingredients one has come to expect from a British-made comedy from its time. What sets Local Hero apart is in the uniqueness of its environment and how under Forsyth’s direction we quickly fall in love with the scenery almost as fast as MacIntyre does. The village, the beach, and the wonderful bizarre mix of characters present all fit together perfectly to make Local Hero stand out as a uniquely original comedy that trades quick wit for the visual indulgence of a truly beautiful country. 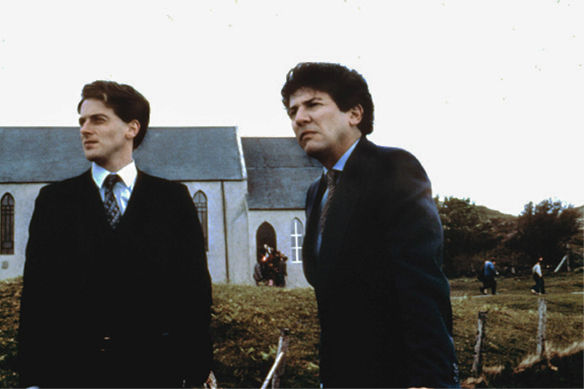